The Rock Show is Back! The Gilsum Rock Swap and Mineral Show, That Is! 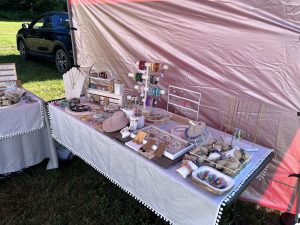 They are back! The Gilsum Rock Swap & Mineral Show was back in business for the first time since 2019.

I was there. I began visiting this show in the 80s when I owned several jewelry stores and a large rock and mineral store. This was one of my favorite shows because it was in a beautiful place, I did not have to travel far, and it was grassroots. There were a lot of folks who had been collectors, miners, and spelunkers as children. I would buy specimens, beads, carvings, faceted stones, cabochons, art, and more for my stores. 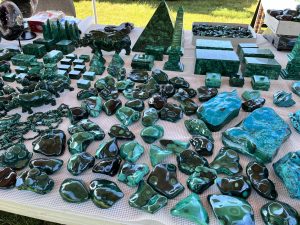 Not being open was tough the last few years because I love this show. This was my first year attending solo in f-o-r-e-v-e-r! Usually, I have family or friends, but it was just me because of the weekend for older grandchildren. This show is a great family gathering. Kids of all ages love it. It is something to put on your calendar for the future.

From their Facebook page–The Gilsum Rock Swap & Mineral show is sponsored by the Gilsum Recreation Committee. This event occurs on the fourth full weekend in June every year. More than 60 dealers and swappers attend every year.

When I arrived, a little after 8, there were vendors who were already set up, those in process of set up and those who may have been still asleep. Breakfast and coffee were available at the tent as a fundraiser. And the early birds were wandering. (A suggested donation as you park, benefits town programs.) A good crowd was already there when I arrived, as the temperature is supposed to climb into the 80s.

Why a rock show? 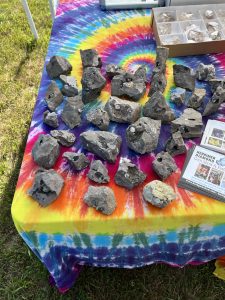 Rocks are everywhere. (I stumbled over one that was on the ground and it was not placed there by a vendor!) And there are mines in every state. Right down the road from the show are 9 beryllium mines. And most kids love picking them up! (Along with assorted feathers, bugs, and creatures, right?)

I mentioned family and the rock crowd are a family. They wander from booth to booth, reconnecting, viewing one another’s wares, trading, buying, and swapping stories. A cup of coffee in one hand and an eye on the new merchandise. (I always felt I could locate that next big piece at shows. Does anyone else feel that way? I drooled seeing some of the new pieces that had been uncovered.)

I love to watch the vendors who talk to the young ones and tell them the histories and properties of rocks and minerals. (Often giving them a free stone or specimen to get them “hooked.”) How about ulexite? The TV rock! Or geodes that are opened to reveal the beauties of amethyst and quartz. It may be the piece of obsidian, the volcanic rock that shines. (Some of the small, rounded obsidian pieces are known as Apache tears.) I have told my children to listen to these people. That they would learn more in a few hours at a rock show than in a month of science classes.

My parents took me to garnet mines in the Adirondacks, to caverns and caves, and to places like Herkimer. Camping and having fun. (I still try to get over to places like Natural Stone Bridge & Caves on a regular basis.) I love the fossils and I admire the carved pieces and the jewelry.

And a lot of the vendors have been coming with family since they were small. Generations of collectors. I met with people who came here when they were young.

I talked to Ryan Chevalier of Birch and Stone Jewelry, in Surry, NH. Her booth displayed the jewelry she makes. She shared with me her visits as a child and to a store that used to be in Keene, NH. Ryan was waiting for her family to show up so she could wander and locate beads and stones for her creations.

Thank you to the vendors who faithfully show up year after year to this show. (You may know, Gilsum does seem to be in the middle of nowhere.

) Who drive hours and days, sometimes. Who sometimes unload cars and trucks, after an evening meal. Sleeping in tents and campers. Thank you. (As someone who has done my share of vending at shows, I appreciate these folks!)]

The show runs until tomorrow, the 26th when they will pack up their wares, and head home or to another show. 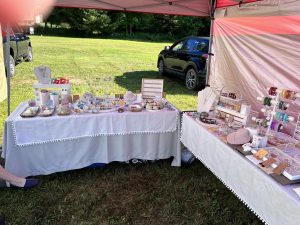 Are you a vendor or business? Take advantage of our free listings and the ability to publish events for free.

Lee is married, a father and grandfather. He loves to promote family events and activities as well as publish the positive news that happens.

PrevPreviousToday is The Great American Campout? Are You Camping?
NextWe Change Things Through ForgivenessNext