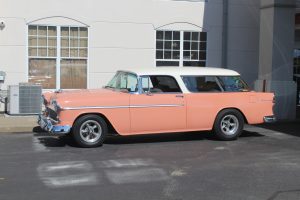 Family time is so important to me. And the rest of the campers showing up? Perfect!

(If you just want to see the pictures, check out my album on Facebook.)

Yesterday, I took a morning walk around the campground. As the fog rose, I uncovered lots of new campers, some cool cars, and a flock of Downy Woodpeckers. Coming back to the cabin, I had some breakfast, and we got ready for Alyssa and the kids to get here. 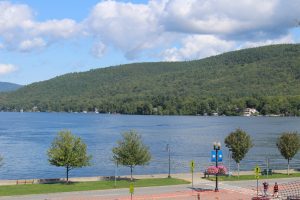 Looking out over Lake George

They arrived a little after 11, and after an unpacking frenzy, we all sat down for some lunch. We made our plans for the rest of the day. We decided to go to the car show for the afternoon, come back and chill, eat dinner and then head back.

We headed down to the car show and found some parking. We climbed up the stairs to get to the car show. The car show sits next to a fort, and the upper level is set at the Fort William Henry Hotel. From the show itself, you overlook the lake. We got our 4-day wristbands and headed into the show. The music was playing, and folks were lined up to get their cars in the show.

So much thunder, so many amazing cars. The lot was filling up fast, and even though it was Thursday, there were lots of people wandering up. The generations were here. And the weather? Sunny and warm! 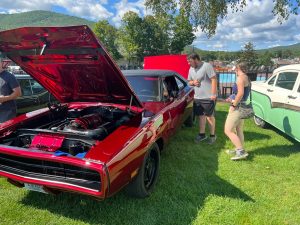 I like to hear the history of cars, not just look at them. And my family is the same.

Tina found an owner detailing his Charger. He was telling her and the kids that he had bought this car when he was 16, and he was 54 now. He had done motor upgrades and things like brakes. This car was a candy apple red and stood out against the blues of the pool and the skies. He told them he can spin the tires 1st, 2nd, and 3rd, but after that, it is a bit much for him. 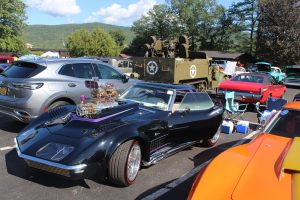 I found a man who had bought a Torino to build. He saw me looking at the books about the restoration, including buying a car for parts. He said it sat in his garage for 35 years when his wife came to him and said “now or never.” He spent the next 3 years on the build, and it was worth it. 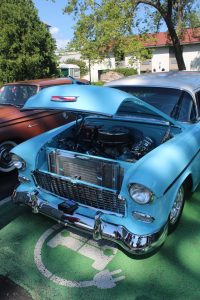 Electric 55 (Check out the parking space)

I was soon coming to my capacity for taking pictures and wandering around. I sat at the entrance and listened to the cars and watched them as they came through registration. This alone is pretty thrilling. As I found some shade, I watched cars out on the street putting on the burnout shows. 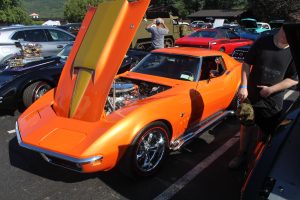 I ran across a Corvette with the hood up. A young man approached me and asked if I wanted to get a picture of it with the hood down. I said, “yes,” and he lowered it. I asked him about it. He said he had it for nearly 4  years and had bought a nice car, and made it better. Next to it was another Corvette. When I told him I had been here for 38 years, he started to tell me about his dad, and the car next to him was his father’s. When I said it looked familiar, he shared that it had been white and he had redone the paint. 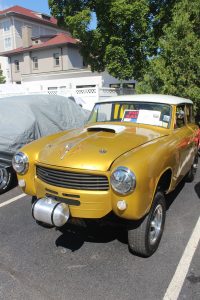 Stories. Life is about stories. People’s stories and, in this case, car stories.

We went down to meet my wife and daughter, and I found them talking to 2 friends from where we live who come over every year for the show, as well. This year they bought a huge tent and stayed in the campground they do. 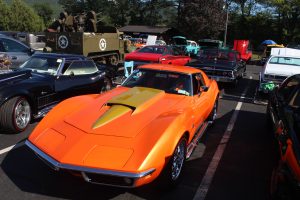 Thanks for closing the hood

The car show for many, is a positive event. It brings people together in a beautiful area.

We came back to the campground to chill and get dinner. Tina made some killer chicken pot pie (crustless) with biscuits.

Then we lost half our crew. Only Jacob, Mariah, and I headed down to the main “drag.”  We found a place to park pretty quickly, so that was half the battle. The kids unloaded the folding chairs and began encouraging cars to rev engines, burn out, and more.

So, while I got several pictures over the next few hours, A lot of my fun was watching the two of them.

Some of last night’s highlights were the Chevelle pulling the front wheels off the ground, the 61 Chevy with the crazy hydraulics, and the old police car that got pulled over by the real police!

Watching these cars cruising the main street in town is cool.

We left, following an old Studebaker truck, returning to the campground to find the left-behind crew playing rummy at the table.

38 years for this car show here.  The world is a different place than it was my first time here, but seeing the old, both cars and people make it worthwhile.

Did you know your business (Including home businesses can appear in our Business Showcase?

Simply go to the SUBMIT>SUBMIT BUSINESS LISTING>BUSINESS>PLAN. Reach out to us for a full Advertising program.

Lee is the owner and publisher of Positive News For You.

PrevPreviousThis is The Day For a Teddy Bear
NextDrive Your Studebaker Day? You Bet!Next